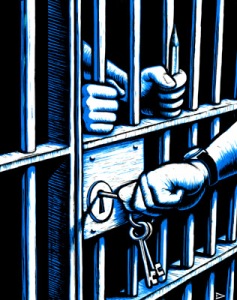 Auckland Peace Action (APA) extends our solidarity and support to our friends from No Pride in Prisons who are working for the release of a transgender woman inside of Spring Hill Prison.

APA recognises the interconnectedness of our collective struggles for liberation, against the violence of state sponsored capitalism, and the security-industrial complex that profits from human misery, war, imprisonment and repression.

Our struggle is for a peaceful and just world. The struggle of No Pride in Prisons against the violence of prisons is an integral part of the peace movement.

There can be no peace while a racist and patriarchal prison system is in operation. The Department of Corrections has no way to appropriately address the needs of transgender people inside so they lock them up in solitary confinement. The continued use of solitary confinement is a form of torture that NZ has already been heavily criticised by the United Nations for using. No right minded person supports torture under any circumstances.

The heavy-handed police presence at the No Pride in Prison’s action in support of this woman yesterday was totally unnecessary, but is illustrative of way in which police are determined to intimidate and profile political activists. It is shameful that the police are assembling extensive files of political activists including photographing and videoing ordinary people attending legitimate protests and pickets.

APA stands beside our friends in No Pride In Prisons in calling for the release of this person from Spring Hill prison.