Every year for the past 19 years, the annual New Zealand Defence Industry Association has been holding its Annual Conference, a weapons trade show sponsored by Lockheed Martin. Lockheed is the world’s largest weapons manufacturer and a maker of nuclear weaponry.

We will be stepping up our organising, and plan to have non-violent direct action to shut down this conference.

We need to get as much information about the expo as we can. Since the New Zealand Defence Industry Association isn’t likely to divulge nearly as much about the location of the expo, the sponsors or the programme of events, we are relying on people to get that information to us. We know that many conscientious people work for some of the companies involved in the Expo, and they don’t want to be part of the global arms trade. If you are one of those people, please consider passing information to us. We’ve got a page dedicated to making sure you can do that safely.

Last year, the expo was held in Palmerston North’s Central Energy Trust Arena. Invited were over 500

representatives from a hundred+ companies including major arms dealers such as General Dynamics, Thales, Babcock, ThyssenKrupp and Cubic.

The 2018 Weapons Expo and the accompanying campaign to shut it down were an awesome and successful week for the peace movement in Palmerston North, and the urge to keep struggling has only grown stronger. It is never easy to stand up to the largest and most powerful industry on the planet – the weapons trade – but it is clear that our work and our tactics are bearing fruit.

The diverse group of people making up Peace Action Manawatū engaged in critical work across their local community. They built real support and alliances from church groups, refugee and migrant groups, artists and businesses. They were patient and persuasive, acting with honesty and integrity in bringing the issue of the Weapons Expo to the City and the Council.

MORE DETAILS ABOUT THE WEXPO

The 2016 exhibition prospectus gives a good indication of the themes of the conference, along with its size and scale. The NZ government, through he Ministry of Defence (MOD), and the New Zealand Defence Force (NZDF), is a major supporter and sponsor of this event.

READ THE WEAPONS EXPO PROGRAMME FOR 2016

In response to the Expo in 2016 Auckla 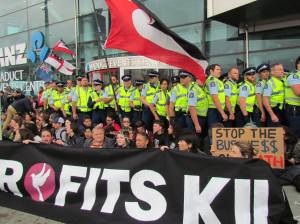 nd Peace Action and our allies successfully blockaded the Weapons expo for a full day on the first day of the conference. Over 350 delegates were kept out of the expo. We disrupted the awards dinner on the evening of the second with a wall of noise intended to jangle the nerves of the weapons dealers inside. We hope this campaign will continue to build momentum in 2017 for an abolition of all support for the arms trade in Aotearoa New Zealand.

In 2016, the NZ Navy also invited 33 countries (see list below) to send warships, planes and soldiers to New Zealand to be a part of its 75th birthday “celebration”. This series of events was scheduled on 13 November with the war preparation exercises dubbed “Operation Mahi Tangaroa”. The events were to include an International Naval Review and an exhibition at the Cloud, public parade of soldiers and an “open day” on board the navy warships.

The Navy birthday is a large scale public relations exercise and recruiting campaign for the NZDF.  Following the Kaikōura earthquake, naval vessels were sent to assist. This opportunity for a real, live “hearts and minds” campaign was too much for the NZDF and certainly the US military to miss out on. The birthday party was largely abandoned in favour of sailing down to be seen doing good work. And while most New Zealanders would support the humanitarian efforts to assist people following the earthquake, it was also pretty easy to see that the 96 cruise missiles on board the US warship were not necessary in order to do disaster relief.

The “birthday” was also an opportunity for the NZ Navy to strengthen its relationships with other militaries, particularly the US Navy. The Navy’s own rationale for the $3 million price tag was “reputation, recruiting, retention, and relationships.”

This was the first time in 32 years that the US has been invited to send a warship to New Zealand. This event is the culmination of many years of work by those who wish to bring the New Zealand military back into the fold of US empire. The NZ government has signed both the  Washington and Wellington Declarations in recent years, re-committing the country to joint military cooperation, and conveniently side-stepping the nuclear-free issue altogether.

In the past fifteen years, New Zealand has largely adopted the US agenda of national security and “counter-terrorism’. This is particularly true since 9/11. NZ has been fighting alongside the US in Afghanistan now for 15 years. A whole series of new anti-terror and broad surveillance laws has been passed, largely mimicking what has been happening in the US. This year, the National government has committed $20 Billion to new military spending. Yet even the military concedes that, ‘New Zealanders can remain confident that the country does not face a direct military threat in the foreseeable future.’* Similarly, the Security Intelligence Service (SIS) and Government Communications Security Bureau (GCSB) have been given large budget and personnel increases to compliment the new spying powers.

The work of the peace movement in Aotearoa is build our movement to dismantle the military-industrial complex, and commit our society to being one that works for, prepares for and provides resources for, peace and justice. Join us in 2019 to dismantle war at its source!